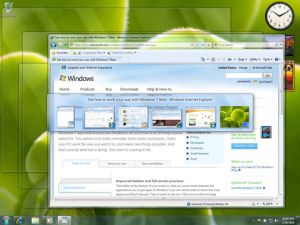 How to get the Windows 7 RC? It is very simple. Visit the official Windows 7 page. The 32-bit and 64-bit versions of Windows 7 RC are available in five languages: English, German, Japanese, French, and Spanish. Select the version and your language preference and click go to register for and download the RC.

You can install the Windows 7 RC on a PC running Windows Vista without backing up the PC. But Microsoft recommends you to keep a backup. On the other hand, if you’re running Windows XP or the Windows 7 Beta, first you need to backup your data. Once you have the backup, do a clean installation of the RC and then reinstall your applications and restore your data.

The RC will expire on June 1, 2010. So, starting on March 1, 2010, your PC will begin shutting down every two hours. Windows will notify you two weeks before the bi-hourly shutdowns start. If you want to get rid of that problem, you need to install a valid version of Windows before March 1, 2010. So, don’t forget about it!