Mobile phone operator Vodafone has just launched the world’s cheapest mobile phone. Named "Vodafone 150", the new mobile phone will be available in market at a retail price tag of less than $15 USD. Another handset, Vodafone 250, was also announced, which will retail unsubsidized at below $20 USD. Vodafone announced the ultra low cost handsets at the Mobile World Congress in Barcelona, Spain. 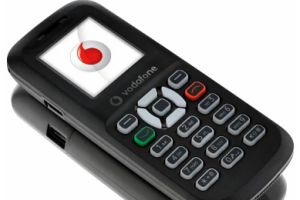 The Vodaphone 150 and Vodaphone 250 are intended for emerging markets where low cost devices have a significant positive social impact. Initially, the new mobile phones will be launched in India and 6 markets in Africa – The Democratic Republic of Congo,  Kenya, Mozambique, Qatar, South Africa and Tanzania.

The Vodafone 150 and Vodafone 250 both offer excellent voice and SMS services, as well as support for mobile payment services. The two devices share most specification features, the main differences between them being that the Vodafone 250’s screen is both color and slightly larger, and it has an FM radio.