Universal Studios Home Entertainment on Tuesday announced the launch of an array of enhanced iPhone and iPod touch-enabled features and social web-based offerings with the release of upcoming titles Bruno, Funny People, 9, American Pie Presents: The Book of Love, Public Enemies, and Inglourious Basterds all available this holiday season. These innovations include the pocket BLU app, which offers iPhone and iPod users touch further enhancements to the Blu-ray experience, and social BLU, which offers Blu-ray users more ways to interact with their Facebook and Twitter networks through an Internet-connected Blu-ray player. 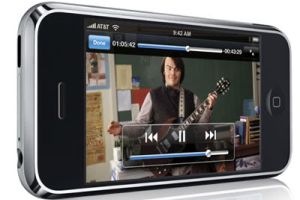 Additionally, Universal Studios Home Entertainment, a unit of Universal Pictures, a division of Universal Studios, will unveil an all-new redesign of its BD-Live Center on Funny People, which makes the dynamic content on the multimedia portal easier to access, more engaging, and easier to use. On future releases, Universal will deliver even more innovative, exciting features based on these platforms, making Blu-ray discs more simple, fun, and sharable than ever before.

* Advanced Remote Control: A sleek, elegant new way to operate your Blu-ray player. Users can navigate through menus, playback and BD-Live functions with ease.
* Video Timeline: By turning the phone to landscape mode, users will bring up the video timeline, allowing them to instantly access any point in the movie.
* Mobile-To-Go: Users can unlock a selection of exclusive bonus content with their Blu-ray discs to save to their device or to stream from anywhere there’s a Wi-Fi network, enabling them to enjoy exclusive content on the go, anytime, anywhere.
* Browse Titles: Users will have access to a complete list of pocket BLU-enabled titles available and coming to Blu-ray Hi-Def. They can view free previews and see what additional content is available to unlock on their device.
* Pop-Up Keyboard: Enter data into a Blu-ray player with this easy and intuitive keyboard that will facilitate such Blu-ray features as chatting with friends and sending messages.

pocket BLU is an extendable platform that will allow Universal Studios Home Entertainment to introduce even more new and groundbreaking mobile features on additional devices and platforms in the very near future. The pocket BLU app is available for free from the App Store on iPhone and iPod touch at www.itunes.com/appstore.

The American Pie Presents: The Book of Love release also will mark the integration of Blu-ray content and social networking applications. This newly developed interactive technology allows users to easily sign on with their Facebook and Twitter login information and enjoy a variety of connected Blu-ray features with their friends. Users can control status updates from their Blu-ray player, the UniversalHiDef.com website, or within pocketBlu.

As part of the newly developed interactive social BLU technology, users can update their Facebook and Twitter profile statuses via BD-Live. With the click of a button, users can rate the movie, send messages and on future releases will be able to share film-related user generated content with their friends via their social networking pages. social BLU opens up an entire world of social networking possibilities.

The newly redesigned Universal BD-Live Center as seen first on Funny People will offer an easy, fun and interactive experience directly from an Internet-connected Blu-ray player. By clicking on "What’s New," users can check out the latest releases coming to Blu-ray and theaters, along with exciting BD-Live features. Additionally, when they visit the new "Content Center," users will intuitively find their favorite previews, trailers and more. Meanwhile, the previously-launched ticker and video rotation automatically bring updated content directly to the viewer. Login and registration aren’t required unless the user wants to access select community features, so browsing BD-Live is easier than ever. Best of all, everything is designed for simple, one-click navigation, making BD-Live perfectly optimized for surfing content with a remote control.