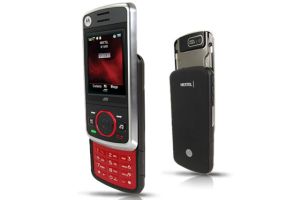 Motorola Debut’s compact slider form factor offers a smooth gliding action for easy one-handed operation, keeps the keypad secure when not in use and offers easy access when needed for instant communication between two people or a group of people, next door or in the next state. It is also the first device to offer the upgraded ability to switch from an active push-to-talk call to an interconnect voice call at the touch of a button. It’s threaded texting messaging will allow users to view entire conversations all on one screen.

With its built-in MP3 player and external music controls, Motorola Debut offers a high-quality stereo music experience through wired headphones or Bluetooth wireless technology. The sound takes on additional dimensions for users who use the built-in 3D Audio equalizer to create special musical effects. It’s 1.3 megapixel camera features up to 4X digital zoom and video capture. Pictures can also be enhanced with advanced imaging features to create a variety of image styles – from full color on the vivid 176X220 color display to sepia tones to black & white. Users can also use GPS Tag Images to document exactly where a picture was taken and a variety of other applications to edit photos and manage video content. It’s expandable memory supports up to 8 GB MicroSD card.

Motorola Debut i856 can be purchased with Nextel Direct Connect calling plans in all Sprint sales channels, including Sprint retail stores, Business Direct Sales, Telesales and Web sales for just $99.99 with a two-year service agreement and $50 mail-in rebate (excluding taxes). Sprint’s Everything Data plans, with Any Mobile, AnytimeSM, which gives customers unlimited mobile calling on the Sprint network to and from any U.S. wireless carrier, unlimited nationwide texting, email, Web browsing and much more, starting at just $69.99.