Saygus, Inc. on Friday introduced the Saygus VPhone, an Android equipped smartphone with America’s first nationwide two-way video calling capability, at the International Consumer Electronics Show (CES). Expected to be available as a CDMA device with a major North American wireless carrier, the Saygus VPhone is an Android-based smartphone for consumers and businesses alike. The VPhone can be seen at the Saygus booths: Central 15029M and South 1 20547 at the Las Vegas Convention Center. 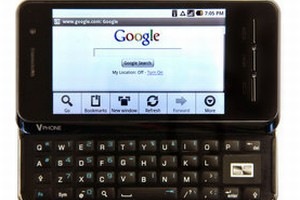 The Saygus VPhone has two cameras— a 5 MP main camera with auto focus and flash and a VGA forward-facing camera for video calling – and provides a host of other features including WiFi, USB and Bluetooth tethering allowing up to eight devices, (ie laptops, MIDs) to connect as an access point, USB host and client capability, slide out keyboard with a large keypad and raised keys for fast and easy typing, larger battery to provide up to four hours of video calling and seven hours of talk time and screen resolution twice that of the iPhone.