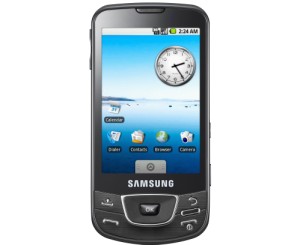 The Samsung i7500 features a slim and compact design with mere 11.9mm thickness. It’s large and vivid 3.2-inch AMOLED display ensures the brilliant representation of multimedia content and enjoyable full touch mobile experience. Bundled with a 5-megapixel camera and various multimedia codec formats, the I7500 also provides a long enough battery life (1500mAh) and generous memory capacity up to 40GB (Internal memory: 8GB, External memory: Up to 32GB) to enjoy all the applications and multimedia content.

Other features of Samsung i7500 include 7.2Mbps HSDPA and WiFi connectivity and access to Google™ Mobile services such as Google Search™, Google Maps™, Gmail™, YouTube™, Google Calendar™, and Google Talk™. The integrated GPS receiver enables the comprehensive use of Google Maps features, such as My Location, Google Latitude, Street View, local search and detailed route description. Users can also download hundreds of other applications from the Android Market.

No details of price have been announced yet. But the official press release stated that Samsung I7500 will be available in major European countries from June, 2009.