Want to customize your Windows XP desktop? Want to add a Mac-style task bar (dock) to your Windows XP installation? If yes, get RK Launcher, a free application that will let you replace your Windows taskbar with a pleasing quick launch dock which closely resembles the Mac OS dock. RK Launcher has support for themes and can support docklets made for ObjectDock and Y’z Dock. This free application also mimics the smooth zooming and scrolling effects of the Mac OS X smooth zooming animations. And with the help of a separate plugin you can even add the Aladdin’s Lamp Effect. Need a RK Launcher demo? Take a look at the screenshot below. It is from my desktop. 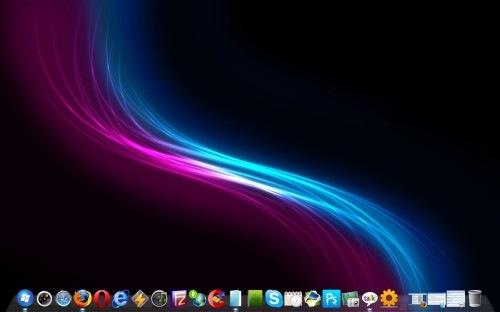 In my view RK Launcher is one of the best desktop enhancements available for Windows XP. It is extremely easy to use and the good thing is there is nothing to install or uninstall. Just get the pack from the link below, extract the contents in your hard drive and run the application. That’s it! Your dock will appear immediately. Start adding items to your dock and enjoy one click application launch in style! The default RK Launcher theme is good. But if you want a different one, just search the Internet. There are many cool RK Launcher themes available for free download.

This article was written by Sandy. Last update on April 3, 2013