Notate and Compose Music with MuseScore

MuseScore is a free and open source music composition and notation software. It offers powerful tools for creation of all kinds of music. Features of MuseScore application include WYSIWYG editor, score creation wizard, templates, repeats, lyrics, jazz notation, percussion notation, chord symbols, user-defined score styles etc. It supports unlimited score length and unlimited number of staves per system. Also up to four different voices can be added per staff. So, MuseScore is a powerful tool for creating, playing, sharing and printing sheet music like a pro. If you were looking for a sheet music creation software, you must give MuseScore a try. 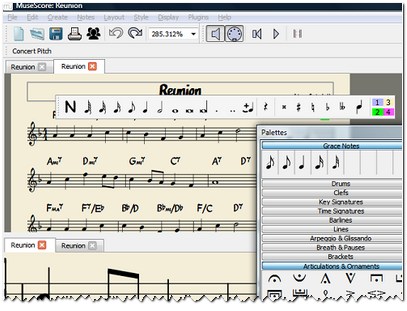 MuseScore interface is easy to use and customize. Most elements in this sheet music software are laid out automatically. But you can easily edit them manually. MuseScore comes with a set of sounds that reproduce common instruments, but you can also substitute any SoundFont you prefer for more realistic instrument sounds and/or a wider variety of instruments. MuseScore has a Mixer window where you can select the sounds used by the various instruments, their relative levels, control reverb and chorus, and so forth. It can also integrate with external MIDI programs and synthesizers via JACK. The internal software synthesizer that can play scores with options like tempo changes, dynamics, articulations, etc. MuseScore can import from and export to the MusicXML format.

The power of this application can be easily extended via plugins. Several plugins are already available for download at the official plugin repository. Some popular MuseScore plugins include ABC import, explode/implode, slash notation, batch export, retrograde, checking adherence to rules of harmony rules, generating cues, playback of crescendo & diminuendo, etc. Users can also create their own MuseScore plugins.

This article was written by Sandy. Last update on March 8, 2013