If you want to start a resourceful site like Wikipedia, the most trusted and resourceful wiki on the Internet, you must try the MediaWiki script. MediaWiki is a free software wiki package written in PHP, which was originally intended for use on Wikipedia. MediaWiki is now used by several other projects of the non-profit Wikimedia Foundation and by many other wikis. 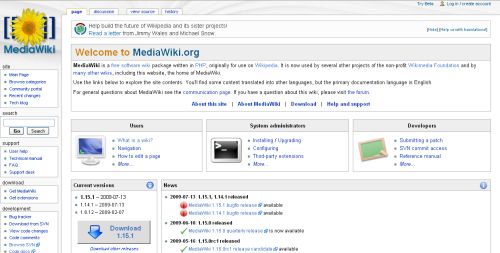 MediaWiki is free server-based software which is licensed under the GNU General Public License (GPL). It’s designed to be run on a large server farm for a website that gets millions of hits per day. MediaWiki is an extremely powerful, scalable software and a feature-rich wiki implementation, that uses PHP to process and display data stored in its MySQL database.

In MediaWiki, pages use the wikitext format, so that users without knowledge of XHTML or CSS can edit them easily. When a user submits an edit to a page, MediaWiki writes it to the database, but without deleting the previous versions of the page, thus allowing easy reverts in case of vandalism or spamming. MediaWiki can manage image and multimedia files, too, which are stored in the file system. For large wikis with lots of users, MediaWiki supports caching and can be easily coupled with Squid proxy server software.

This article was written by Sandy. Last update on March 25, 2013