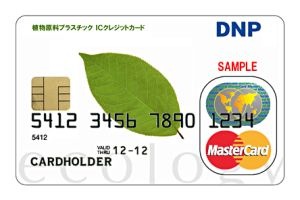 With environmental conservation now a key issue on a global scale, significant business potential can be seen in the practical application of biobased polymers, especially in contactless IC credit cards which are valued for their convenience, reliability and safety. The newly developed card uses plastic derived from biobased polymer, a substance for which there are mounting expectations as a viable new resource. Creating a biobased polymer capable of withstanding manufacturing processes such as the embedding of magnetic stripes and embossing, while also providing durability over repeated use had represented a long-term challenge, but through their joint technological development the three companies have enabled these difficulties to be overcome, and the card has successfully achieved levels of durability and reliability required by international credit card standards (ISO and JIS2 ).

Point to note that, 46.5 percent of the card mass is comprised of biobased polymer, and with superior features such as a reduction in the use of exhaustible resources and prevention of increased greenhouse gas emissions, the card is capable of contributing to environmental conservation.

Furthermore, the card has been successfully mounted with both a contact IC chip and FeliCa3 , a contactless IC card technology developed by Sony. As a result, the card can be used as a multi-functional IC credit card mounted with applications including electronic money, point reward, and gateway controls such as company and student IDs.

Going forward, DNP together with Sony and MPI will promote a variety of businesses including FeliCa mounted multi-function IC cards. DNP will also actively promote sales to financial institutions, targeting sales of approximately 1.5 billion yen by the year ending March 31, 2012.

This article was written by Sandy. Last update on November 19, 2009