LG Display Co., Ltd. recently unveiled a new e-book that is equipped with a specially developed solar cell, which measures 10 centimeters in width and height and weighs just 20 grams. The solar cell, produced by placing electrodes onto a glass or plastic substrate, would allow longer outdoor use of the e-book and lessens worries about battery discharging. 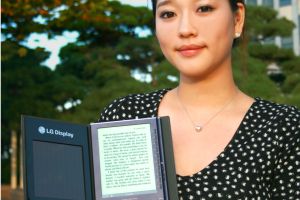 The current energy conversion efficiency rate of the new product is approximately 9.6 percent. Exposure to sunlight for about four to five hours would extend the running time of the e-book’s battery by a day without the need for additional charging. The thin-film solar cell is produced by placing electrodes onto a glass or plastic substrate. Contrary to widely adopted crystalline solar cells that employ silicon wafers, the thin-film solar cell is generally light-weight and easily adjustable in size and form for applications such as e-books or mobile phones.

LG Display is a manufacturer and supplier of thin-film transistor liquid crystal display (TFT-LCD) panels, OLEDs and flexible displays. It will showcase the prototype of solar e-book, as well as its newest cutting-edge display technologies During IMID (International Meeting on Information Display) 2009 in KINTEX, Gyenggi, Korea.

This article was written by Sandy. Last update on October 15, 2009