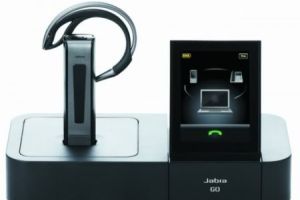 With the Jabra PRO 9400 and Jabra GO 6400, now users can easily manage multiple phones using the intuitive touch screen, start or end calls, adjust the volume, or switch between desk, soft and mobile phones all from one device. Key workforce trends show that employees are commonly away from their desk or out of the office often missing important calls, leading many to cite best-in-class headsets as critical to driving increased productivity. The Jabra PRO and Jabra GO Series feature “always on” connectivity, which increases workforce productivity by saving a minimum of ten minutes per day, ensuring a return on investment within three months. To reduce power consumption and CO2 emissions, the screen display is automatically dimmed during periods of inactivity. In addition, the headsets feature improved ergonomics, which include lightweight and allergy tested materials for all day comfort and allowing users to choose between three wearing styles – headband, neckband and ear hook.

Both the Jabra PRO 9400 and Jabra GO 6400 Series are compatible with Unified Communications (UC) solutions from leading vendors such as Microsoft and Cisco and feature a SmartSetup wizard on the touch screen to guide users through the simplified process of connecting phones and choosing preferences. The user-friendly touch screen controls incorporate Bluetooth, DECT and USB phone technology. The clear resolution and colorful icons of the touch screen allow users to easily manage calls at a glance. For those who have not transitioned to UC, the headsets can be used with both traditional and VoIP telephony systems.

The Jabra GO 6400 and Jabra PRO 9400 Series are currently available with suggested retail prices starting at $199 from GN Netcom partners in North America and additional information can be found at www.jabra.com/StayInTouch .

This article was written by Sandy. Last update on October 21, 2009