Pop icon Britney Spears finally launches her own iPhone and iPod Touch app. The new app, named “It’s Britney!”, is currently available at the iTunes App Store for $1.99. With the “It’s Britney!!” app. With the official Britney Spears iPhone app, fans will receive official news first hand, get exclusive messages from Britney herself, be able to create and share images of themselves and friends on stage with Britney, have access to updated photo galleries which include real time photos, exclusive tour images as well as a photo gallery of over 100+ iconic images of Britney over the years. Additionally, the app features a “Shake Shake Shake” feature in which Britney says “It’s Britney Bitch!” every time the user shakes their Apple iPhone or iPod Touch. 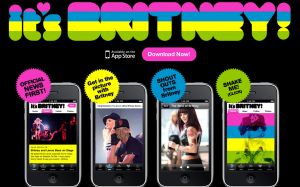 Some exciting features of the “It’s Britney!” iPhone application: