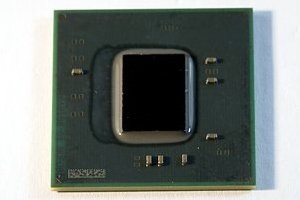 The Intel Atom processor was designed from the ground up for small devices and low power, and remains Intel’s smallest chip, built on the company’s 45nm high-k metal gate manufacturing process. The overall package, including chipset, just got smaller due to the increasing integration and 45nm manufacturing, which means smaller, more compact system designs, lower costs for OEMs and improved performance. Major OEMs have committed to having systems on the new Intel® Atom™ processors and a new companion chipset available within the next few weeks.

One of the most significant features of the new platform is the integration of memory controller and graphics into the CPU, a first in the industry on x-86 chips. That means two chips (CPU+chipset) instead of the previous three (CPU, chipset, I/O controller hub), a lower TDP, and substantial reductions in cost, overall footprint and power. The netbook platform features a 20 percent improvement in average power and a smaller package size over the previous Atom platform. This translates into smaller and more compact system designs and longer battery life. Because of the integration, the total footprint for the netbook platform has decreased by approximately 60 percent. For entry level desktop PCs, it’s a nearly 70 percent reduction in footprint and about 50 percent lower TDP than the previous generation.

This article was written by Sandy. Last update on December 21, 2009