Home > How to Import Tumblr posts to a WordPress Blog?

How to Import Tumblr posts to a WordPress Blog?

Tumblr users who want to switch to self-hosted WordPress might wonder if there’s a quick import tool? Yes, there is. Those who want to move from Tumblr must try Tumblr Importer, a handy tool for importing Tumblr posts to a WordPress powered blog. This free WordPress plugin can import media, posts, drafts and pages. It can also handle post formats. Importing is done via Tumblr API. Tumblr Importer performs importing process in background, which will come handy in importing from a blog with tons of posts! Also, there’s duplicate checking to prevent duplicate posts during import. 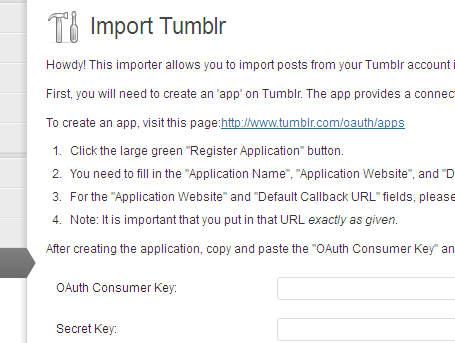 How to install Tumblr Importer?

How to use Tumblr Importer?

Before importing Tumblr posts, you need to create an application on Tumblr, which will work as a bridge between your blog and Tumblr. To create a Tumblr app, visit this page: http://www.tumblr.com/oauth/apps and click the “Register Application” button. Complete the form by adding values to the “Application Name”, “Application Website”, and “Default Callback URL” fields. The Application website and callback URL should be same, which is your blog URL. Create the app and get “OAuth Consumer Key” and “Secret Key”. Open the Tumblr import tool (as mentioned in step 4 above). Enter your OAuth Consumer Key and Secret Key. Then press Connect to Tumblr button. Follow the importer and complete the import process.

This article was written by Sandy. Last update on April 6, 2013