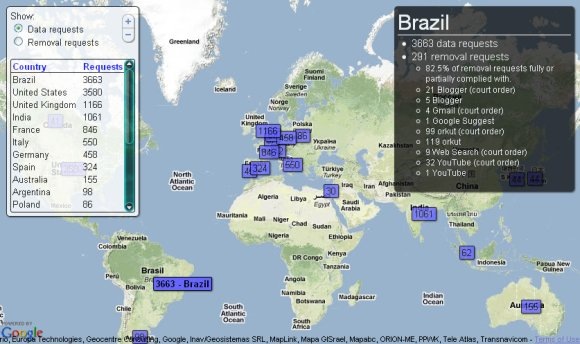 Right now, Brazil is on top of the list, with 3,663 data requests and 291 removal requests. The United States is in second position with 3580 data and 123 removal requests. China is excluded from the tool, as it is state secret! The Government Requests tool is using data from July 1, 2009 to December 31, 2009. Google is planning to update the data in 6-month increments.

Google receives removal requests for Google search results and for other Google products, including YouTube, Gmail and Orkut. On the other hand, in some cases, governments also asks for information about Google user accounts or products. Google do fulfills legitimate requests. You can view all the details on the Government Requests tool. Take a look.

This article was written by Sandy. Last update on April 21, 2010