Good news for ‘God of War’ fans! Sony Computer Entertainment America (SCEA) announced today the worldwide release of the God of War III Ultimate Edition available exclusively for the PlayStation3 (PS3). Built by the fans and for the fans of the award-winning God of War franchise, the God of War III Ultimate Edition will feature premium collectible and exclusive  digital content encased in a high-end sculpted replica of Pandora’s Box. 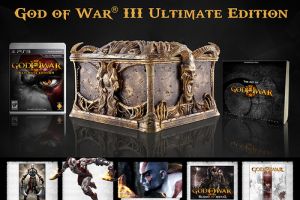 Developed by Sony Computer Entertainment Worldwide Studios, Santa Monica Studio, God of War III is set in the realm of Greek mythology and is a single-player game that allows players to take on the climatic role of the ex-Spartan warrior, Kratos, as he treads through the intimidating heights of Mt. Olympus and the dark depths of hell to seek revenge on those who betrayed him. Armed with double-chained blades, Kratos must take on mythology’s darkest creatures while solving intricate puzzles throughout his merciless quest to destroy Olympus.

In addition to a copy of the highly anticipated God of War III and the limited-edition art book, fans will receive exclusive digital content headlined by the director’s cut of God of War: Unearthing the Legend, a full-length movie documentary depicting the history of the God of War franchise. The Ultimate Edition will also include God of War- inspired downloadable music in the form of the God of War Trilogy soundtrack and the God of War Heavy Metal EP (Extended Play). Lastly, fans will have access to the God of War Combat Arena, containing an exclusive environment and up to seven unique challenges, as well as the exclusive Kratos skin, Dominus, all available for download via the PlayStation Network.

This article was written by Sandy. Last update on October 31, 2009