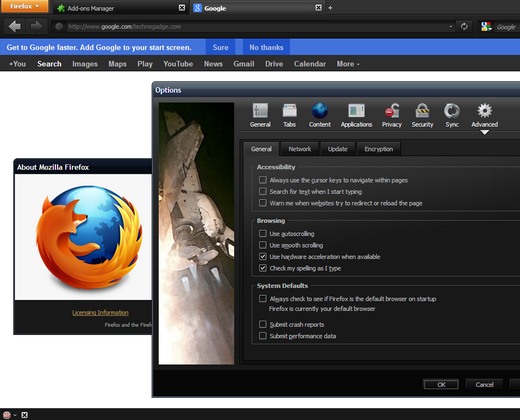 The look of this amazing Firefox theme can be easily tweaked by using subskins. A subskin is a mini theme added to the existing theme. The NASA Night Launch comes with several subskins with different abilities. For example: add background image to main browser window, add side image to the Options window, style toolbars and toolbar buttons etc. How to use a subskin? First create a custom stylesheet by using Stylish add-on for Firefox. Then add the stylesheet to one or more subskins. You can also mix multiple subskins. Take a look at the screenshot above. It is NASA Night Launch theme on an Windows XP computer.

NASA Night Launch theme is compatible with Firefox 17 and above. It runs smoothly on Windows XP, Vista, Windows 7, Mac OS X, and Linux operating system. Many Firefox add-ons are compatible with this theme. In fact, it has specific code for some of the most popular add-ons such as DownThemAll.

This article was written by Sandy. Last update on April 5, 2013