Rainmeter is an open source desktop customization and system monitoring utility for Windows. Rainmeter not only changes the look of your desktop, but also offers quick access to various resources such as system information, utility tools, weather, RSS feeds, web services and favorite websites. It works on Windows XP, Vista, Windows 7 and new Windows 8 operating system. Desktop customization is easy with this freeware tool. All you need to do is install the application, add some skins and use your imagination. Rainmeter skins are easily available on different websites. In fact, there are thousands of them! Read on to find out more about this amazing desktop customization and system tool. 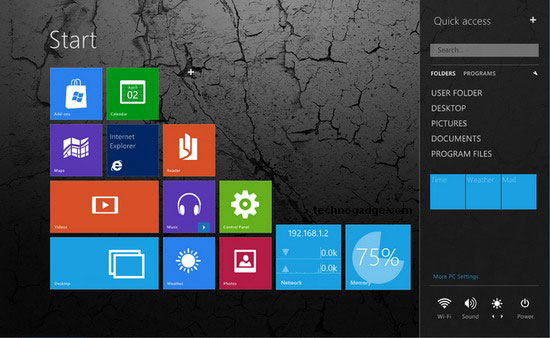 Rainmeter never changes the visual style or any Windows components. It simply adds options to display skins on your desktop. So, your Windows theme or visual style, wallpaper and toolbar remains same. It is the skins which adds different look and functionality to your desktop. In simple words, desktop customization with Rainmeter works like this way:

For example: look at the above image. It is a screenshot of Windows XP desktop running Rainmeter.

Rainmeter skins depend on two important components: measure and meter. A measure is an object that retrieves information required by the skin. Measures can obtain information from your system, RSS feed data, text file, website or other sources. A meter is a component which adds visual style to the skin. For example: images, charts, buttons, frames, borders etc. Rainmeter skins are not limited to simply displaying system information. Some of them can perform tasks like save an image of desktop (screenshot), record notes and to-do lists, control your media player, launch applications etc. Each and every skin of Rainmeter is 100% open source and easily editable.

Is Rainmeter heavy on system resources?

Some utility tools easy adds extra load on your system. But Rainmeter is not one of those. Rainmeter uses little CPU power and RAM. You can even run it on an old Windows XP system with low RAM.

This article was written by Sandy. Last update on April 3, 2013