Researchers at Siemens have improved on their own record for wireless data transfer using white light-emitting diode (LED) light. In collaboration with the Heinrich Hertz Institute in Berlin, they have achieved a data transfer rate of up to 500 megabits per second (Mbit/s), which is definitely impressive compared to the previous record of 200 Mbit/s. Wireless data transport by means of light paves the way for new applications in the home as well as in industry and transportation. 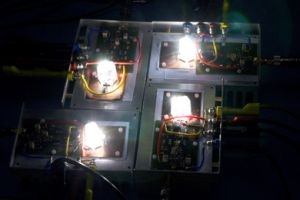 Using a white LED produced by the Siemens subsidiary Osram, the researchers from Corporate Technology in Munich succeeded in transmitting data over a distance of up to five meters of empty space. The data are directly transferred by modulating, via the power supply, the amount of light emitted by the LED. The researchers used an Ostar LED, one of the brightest LEDs on the market, which can be modulated at such a frequency that data transfer rates of up to 500 Mbit/s are possible. The resulting changes in brightness remain imperceptible to the human eye. The receiver is a photodetector which converts the light signals into electrical pulses.

Known as VLC (Visible Light Communication), this form of data transfer has a variety of potential applications. In the home, for example, it could represent a valuable addition to established WLAN technology. Increasingly, wireless networks are compromised by the fact that in many buildings the three independent WLAN frequency bands are multiply occupied, which leads to collisions among the data packets. In a situation like this, visible light, as a currently unused and license-free medium, offers a suitable alternative. A further advantage is that this form of data transfer is impervious to interception. Only the photodetector that is positioned directly within the light cone is able receive the data. In other words, it is impossible to "tap" the data transported in the light beam. There is also a need for this type of data transfer in factory and medical environments, where in certain areas radio-borne transmission is either impossible or only a limited option. A further application is in the field of transportation, where LED stoplights or railroad signals could be used to transmit information to cars or trains.

This article was written by Sandy. Last update on January 26, 2010