Karta Mobile Inc. on Tuesday announced the public availability of Viira 2.0, the updated and enhanced version of its popular BlackBerry application that brings the principles of David Allen’s Getting Things Done (GTD) productivity system into the hands of busy professionals, executives and entrepreneurs worldwide. Viira 2.0 comes with Email integration, next actions, priorities and more features to help people get things done. 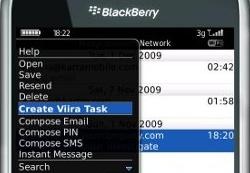 The new version of Viira adds several industry firsts, including the ability to create tasks based on incoming email messages, effortlessly prioritize tasks, and designate next actions. Viira is also the only BlackBerry GTD app to fully incorporate appointments and events in its underlying organizational system. Since its debut in 2001, the GTD methodology has been enthusiastically embraced by millions of knowledge workers around the world.

While a multitude of web-based tools for implementing GTD have been made available over the last years, the engineering challenge of building effective and intuitive BlackBerry applications has left the principles of Getting Things Done under-represented on BlackBerry smartphones.

With Viira 2.0, BlackBerry owners can now conquer their inboxes by creating to-dos from the incoming email messages and immediately filing them in their appropriate place. Handling large volumes of incoming email has been a known pain point for people implementing Getting Things Done with BlackBerry devices – until now.

Viira 2.0 fully supports all modern BlackBerry devices, including the new BlackBerry Bold 9700, the BlackBerry Storm, the BlackBerry Storm 2, the BlackBerry Tour 9500, as well as the BlackBerry Pearl and Pearl Flip models. Viira does not require an active Internet connection to work properly and can continue to function just as well in areas with limited or no wireless coverage, such as tall buildings, basements, airports and metro areas with overly-congested wireless networks such as San Francisco. For more information on Viira, or to download the 21-day free trial, you can visit KartaMobile.com.